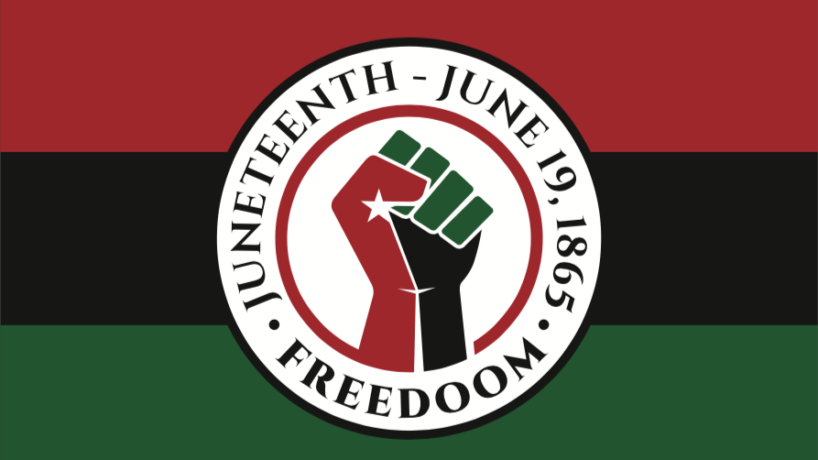 Today We Celebrate 155 Years of Freedom!

Juneteenth, also known as Freedom Day or Emancipation Day, recognizes June 19, 1865 and the announcement of the Emancipation Proclamation in the state of Texas, more than two years after it was issued. It also acknowledges the enforcement of 13th Amendment, which declared of the abolition of slavery in the U.S.

This second Independence Day is observed as a state or ceremonial holiday, now, in 49 of the United States.

Text of the Emancipation Proclamation

Portrait of Civil War ‘contrabands,’ fugitive slaves who were emancipated upon reaching the North, sitting outside a house, possible in Freedman’s Village in Arlington, Virginia, mid 1860s. Up to 1100 former slaves at a time were housed in the government established Freedman’s Village in the thirty years in which it served as a temporary shelter for runaway and liberated slaves.

As slaves were freed after the Emancipation Proclamation, the United States government established “Freedmen’s Villages” to house, clothe, and educate freed slaves. Ca. 1863-1865

@GovernorVA proposes #Juneteenth to be recognized as a paid state holiday, starting this Friday...#rva pic.twitter.com/hfvtbRYJtz

What is #Juneteenth? #blackish has you covered as we look back on this iconic episode and prepare to honor and celebrate this day. pic.twitter.com/5NZvbH7X4v

.@SpeakerPelosi
: "Tomorrow is #Juneteenth...in observance of that, I've sent a letter...to the Clerk of the House directing the Clerk to remove the portraits of four previous Speakers of the House who served in the Confederacy."

Later, the portraits were seen being removed. pic.twitter.com/3VuiImrnwJ

WBLS Roll To The Polls! Get Out And VOTE

Today is an important day tri-state! If you haven’t already👀 you know what you need to do…VOTE! Not sure where to go? Find your polling location HERE!  Exercise your Civic Duty🙏🏾 Check out our Doctor Bob Lee

Beyonce stands with Joe Biden and Kamala Harris and urges followers to vote a day before election day. The singer shared a black and white boomerang with a sticker while rocking a Biden/Harris face mask.  In her

Why We Vote With Ann Tripp: Robert P. Jones Discusses White Supremacy And It’s Use Of Christianity

Why We Vote With Ann Tripp: David Zucchino Discusses Black-Run Wilmington, NC And The Murderous Riot Of 1898

More On Election 2020… In this edition of Why We Vote with Ann Tripp, author David Zucchino tells the story of a black-run government in North Carolina, port city, Willmington, and the outrage it caused white supremacists. Zucchino

Why We Vote with Ann Tripp: Margret Kimberly Discusses The Story of Black People And The Presidents

Kentucky Attorney General Daniel Cameron wants to make sure that the details in the Breonna Taylor case remain quiet.  Cameron has filed a motion as an attempt to ban an unidentified grand juror from publicly speaking about