A lucky man is putting a smile on Keyshia Cole’s face as of lately.

The “Love” singer has been showing off a new boon on her social media. Most of her posts hint that she found a new love, but she didn’t give fans many details.

Keyshia shared images to her Instagram Story, posting a few cryptic relationship memes. One post said, “when you find someone that matches your energy,” with a fire emoji. Another was an image of KC holding hands with a man. She didn’t reveal his face, but she put heart-face emojis. 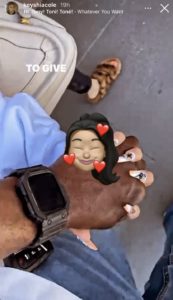 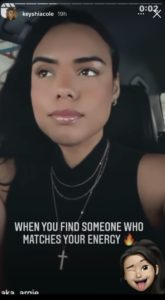 The former reality star and her ex, Niko Khalè, called the relationship off last summer. It’s not clear why, but they’re seemingly on good terms. Earlier this year, during Verzuz, Niko said he wasn’t responsible for her mood that night. They welcomed their son into the world in 2019.

Keyshia is working on her eighth studio album, reportedly titled Album 8. She told fans last month she’s retiring from music to focus more on her children. She still plans on performing her old jams. Check out her latest single, “I Don’t Wanna Be In Love.”

KRS-One Honored With A Mural In NYC

Will Smith Confirms Another ‘Bad Boys’ Movie Is Coming