According to Hits Daily Double, the highly anticipated Black Panther: Wakanda Forever soundtrack will feature not one, but two new songs from Rihanna.

The rumors of Rihanna being featured in the Black Panther sequel began in 2020. There were claims that the “Umbrella” star would be joining the cast. However E! News, confirmed back then that there is no evidence to back up the claims. Fast forward to today, suspicions of her involvement in the sequel have reignited.

The original Black Panther has a music score that lived up to the hype before the film’s release. Kendrick Lamar, 2 Chainz, SZA, Vince Staples, The Weeknd, are just a few artists who helped make the soundtrack emotionally raw matching that sentiment of the film. The first soundtrack, which earned a Grammy award, set such a high standard for the Marvel film. If we couple that with the fact that fans have been waiting for years for new music from Rihanna, this new rumor is certain to have the “Rihanna Navy” setting the internet ablaze.

rihanna already has the superbowl halftime with an apple music sponsorship, the black panther soundtrack, and an highly anticipated comeback as her rollout …. this may be the best album rollout of the decade. pic.twitter.com/VG0G8rpQwb

Rihanna’s Fenty Beauty is currently valued at $2.8 billion according to Forbes. She made the deal in 2017, the year after her last album, ANTI, was released. Her Fenty Beauty endeavors quickly gained momentum much due to the inclusivity and affordable pricing. At the same time, her other brand endeavor, Savage X, grew to be a juggernaut in the lingerie industry. It is currently valued at $3 billion. With all of the business ventures plus being a new mom, her music had been on the back-burner for a couple of years. 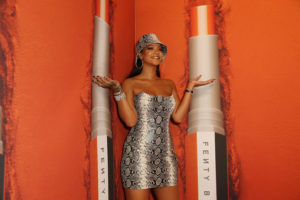 The Black Panther movie delivered an original-score release as well as an “inspired by” album, which the sequel will follow suit according to sources. The sequel’s teaser displays an emotional cover of Bob Marley’s “No Woman, No Cry” from Nigerian singer Tems mixed with a Kendrick Lamar sample of “Alright.”

Rumors are flying and I can add to them: I've been hearing for weeks that Rihanna is recording the end-credits song for BLACK PANTHER: WAKANDA FOREVER. How do you follow up a classic like "All the Stars"? By snagging Rihanna's first big song in years.