If you were around in the 90s, you might be familiar with NBA Jam. It is a basketball video game series initially developed in 1993, featuring photorealistic graphics of NBA players with an exaggerated style of playing. However, the cabinet for the original game stood at 57.8 inches tall,  The new NBA Jam: Shaq Edition is not only bigger, measuring at 67 inches tall, but features a wider screen and four sets of joysticks. 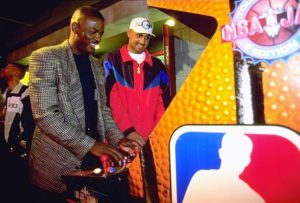 In a press release, Scott Bachrach, the CEO of Arcade1Up, expressed his gratitude for the partnership with Shaq. “We are honored to have worked closely with Shaq to create his very own arcade machine”.

“The pure scale of it is something our fans have been asking for since our inception – we thought, who better to make a large-scale machine than the world’s favorite big man!”

The NBA Jam: Shaq Edition is Arcade1Up’s largest machine yet. It features three classic games NBA Jam, NBA Jam: Tournament Edition, and NBA Hangtime. Sporting Shaq’s distinct silhouette on each side of the cabinet, the Wi-Fi connected arcade machine allows gamers to play up to four opponents from their own NBA Jam: Shaq Edition or on Arcade1Up’s original NBA JAM™ arcade machine.